The North Coast Of Otranto 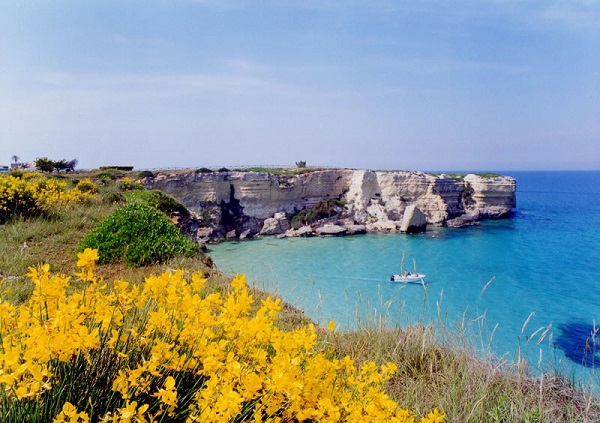 A short distance from the Residence Casa Vacanze Cerra, the beautiful inlet called “Mulino d'acqua” (Water Mill) is one of the many inlets formed by the sea erosion that we find on the north of Otranto. Here water transparency is unbeliavable.

Going further, about 10Km from Otranto, lie the Alimini lakes.

These lakes are formed by the sea. With the ebb and flow phenomenon the sea formed two marvelous lakes. Alimini Grande (Big Alimini) is linked to the sea by a mouth and it consists of slightly muddy brackish water, whose particular composition has fostered thriving aquaculture activities. Alimini Piccolo (Little Alimini), also known as Fontanelle (Little Fountains), is powered by rainwater and by a series of springs, so it is a freshwater lake. These lakes are surrounded by a typical Mediterranean maquis, a wild bushy land, with rosemary pants, oaks, heathers, and rock roses. In summer a specimen of wild marsh orchids marsh is in full blossoming.Alimini offers a nearly infinite expanse of sandy coastline with very low or virtually non-existent cliffs. Here the beach is flanked by dunes and a large pinewood.

Further north lies Frassanito, known for its beaches and coves surrounded by the green of the pine trees and the Mediteranean maquis. If you keep walking you reach the sea-front of Sant'Andrea (St. Andrew), with its small harbor, sheltered from the sea by large rocks, which hosts for the most part big fishing boats. The town is very small and the few houses were largely converted in restaurants and pizzerias because this place, as the locals call it, is a “pension for tourists”. In any case, Sant'Andrea is much appreciated for its beauty and for the crystal clear seawater.

Along the north coast, you reach Torre dell'Orso (Bear Tower), known for its wide beach surrounded by a very high coastline that shelters the place from the North and Sirocco winds. In the past Torre dell'Orso has been the subject of research and excavations that have unearthed ancient civilizations and caves where supposedly sacred rites took place; these caves were created near the coast in areas highly visible to those who came by the sea. In the bay of Torre dell'Orso there are “Le due Sorelle” (The Two Sisters), two large rocks just a few meters from the shore, a common site for spearfishing, almost always full of anchored boats.