The South Coast Of Otranto 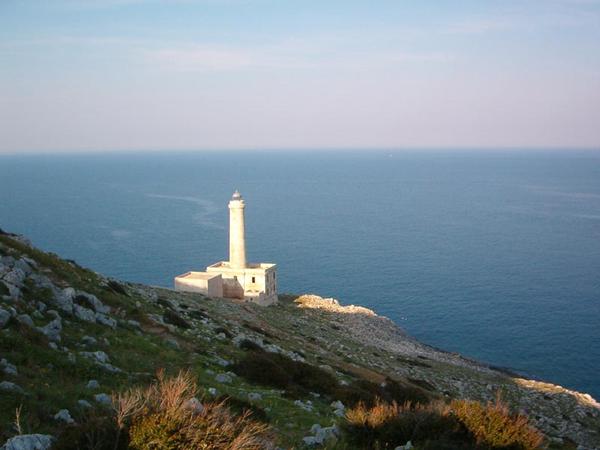 The south coast is surely the most striking and characteristic of the coast of Salento, linking the city of Otranto, Santa Cesarea Terme, Castro Marina and then down to the popular tourist resort of Santa Maria di Leuca.

The coast south of Otranto is composed of a long stretch of cliffs that slope down to the sea. You start from the port of Otranto and continue towards Castro, Santa Cesarea Terme, where on the right stands the Torre del Serpente, Serpent Tower, symbol of the city. If you look over from this point you can see the Torre dell'Orte (Orte's Tower) dating back to 1500.

South of the Baia delle Orte (Orte's Bay) you can see the white lighthouse of Punta Palascia (Palascia Point), called the Cape of Otranto. It's a recently renovate strusture situated on the easternmost point of Italy. After the lighthouse of Palasca lies the Island of Sant'Emiliano, a rock not far from the coast. It's the chosen resting place for many seabirds. Right in front of the island, the Tower of Sant'Emiliano lies perched high on the cliffs of the mainland. The tower was built in the fist half of the XVI Century. This place is an amazing landscape with low vegetation, characterized by the presence of stones, boulders and white rocks. It's a steep and barren landscape, but very impressive in its rawness.

You can see springs of fresh water just a few meters from the coast. Their origin is karstic. After Sant'Emiliano you arrive to the little harbor of Porto Badisco (Badisco Harbor), where, according to the legends, Aeneas landed. The place captures travelers' curiosity for its beauty and for its clean sea. There's something for everyone: sand and rocks. On the left side of the bay, there are the old Cunicolo dei Diavoli, (the tunnel of the devils) and Grotta Galleria (Cave Gallery), an underground passage. If you keep going further you reach the cave of Aeneas.

Porto Badisco is one of the most fascinating places of all the coast of Otranto. The sea of Porto Badisco is green-blue and crystal clean, and the little beach, a long and narrow strip of sand, is the only place on the coast not characterized by high cliffs and deep water.

If you keep going on the enchanting coast, you arrive in Santa Cesarea Terme, a charming little resort very popular during the summer, for the beauty of the place, for the fact that it's a spa town, and also for its famous sea caves. The chlorinated water and the sulfurous springs flow in four natural caves that communicate with the sea. In recent years there has been a good development of spa tourism, with many families going there to enjoy the healthy water. What you see before you is a rocky coast, full of prehistoric caves with really fascinating scenarios, like the cove of Porto Miggiano.

After few Kilometers you get to Castro Marina: This seaside town is especially famous for the Cave of La Zinzulusa, one of the largest caves in the world, inhabited by Neanderthals about 60,000 years ago. The name comes from "Zinzuli," which in the local dialect means rags, identifying the stalactites hanging from the ceiling.
The area you can visit is about 150 meters long and full of very beautiful limestone formations. Farther south, among the prickly pears hanging from rocky cliffs, you finally reach Leuca, located on the tip of Italy, which ends on the high cliffs of Punta Melis, where the Ionian Sea meets the Adriatic Sea.

From this seaside town on the southernmost tip of the region Apulia, under specific weather conditions it's sometimes possible to see a line between the currents from the Gulf of Taranto and those from the Otranto Channel.