The Food Of Salento 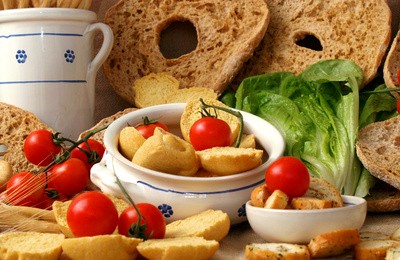 In Salento good cuisine is at its best! There are many typical dishes of local culinary traditions and they vary enormously, with countless ingredients, from those that originates from the land and those that came from the sea. The local cuisine is simple and poor, but very nutritious and rich in flavor, reflecting the many rulers who have conquered this land, leaving an indelible mark in the culinary arts.

The many "food festivals" recall ancient dishes and old culinary traditions and are common throughout the year. We also use spices to flavor of the Mediterranean dishes: sage, rosemary, thyme, marjoram, mint and oregano. The presence of other ingredients such as almonds, honey and cinnamon is typical of many regions of the Near East and the Mediterranean coast.

Among the first courses there are the Ciceri and Tia (tagliatelle, a kind of pasta, and chickpeas), a popular dish much appreciated nowadays, and the Sagne 'ncannulate, a long and twisted kind of pasta that resemble twisting Baroque columns.

Orecchiette and little macaroni (minchiareddhi) are a genuine dish, very tasty when served with vegetable or meat. As main courses, since large livestock are lacking in the region, houswives have created tasty potato and ricotta cakes filled with vegetables (pitte). The turcinieddhri, rolls made with lamb entrails and flavored with herbs, are also among the most ancient and typical dishes of the tradition of Salento.

Barley frize (those made with wheat were intended for gentlemen), are a kind of toasted bread, which, after being soaked in water, was seasoned with tomato, olive oil, arugula and oregano. The taieddha, then, is the triumph of the culinary versatility of Salento. It's made with zucchini, potatoes, artichokes, onions, tomatoes and mussels. The purceddhuzzi and the 'ncarteddhate are typical Christmas sweets and made of sweet dough. They are then shaped into balls or cut into strips that are wrapped up like roses, embellished by anesini (aniseed sweets) and honey.

The importance of wine in the tradition of Salento is demonstrated by the great celebrations that are held throughout the peninsula in honor of San Martino da Tours, on November 11, the day when you taste the novello (the new wine) and open the bottles of the last harvest. There are other significant and important traditions, however, that are repeated every year in Salento The largest is the “Festa te lu mieru”', held in the square of Carpignano Salentino in early September during which you can taste typical dishes of the local cousin, all washed down by the excellent wines of Salento.

Among the local red wines (rossi) it's important to remember the Negroamaro, the Salice Salentino, the Malvasia Nera, while among the white wines (bianchi) the unforgettable ones are the Malvasia bianca, the Bombino bianco and the Verdesca. We also have traditional rose wines. The climate has also allowed us to grow with amazing results wines such as Chardonnay and Sauvignon and the millennial experience in wine production has enabled Salento to achieve very high quality standards.


Of course the above is just a sample of the countless delicacies of Salento!